Osteopathy At The Cheerleading World Championships

In April this year, our very own Hawthorn Osteopath Dr Penny White travelled to America with the Australian Cheerleading team as their Osteopath at the world championships.  She was interviewed for Osteo Life magazine about her experiences travelling as an Osteopath:

Tell us a little bit about yourself.

My name is Penny White and I have been an Osteopath for over five years. Since an early age I participated in dance, and it was through injuries as a result of dance that led me to become an Osteopath. Dance often is a gateway to the sport of cheerleading which I have been participating in for eight years with various clubs in Melbourne.

Throughout my career I have combined my knowledge, enthusiasm and passion for dance and cheerleading to help treat many athletes. I have helped many athletes throughout my time in private practice and more recently have been able to help teams in a competition environment.

I have personally competed in Cheerleading for the past eight years, with a highlight representing Melbourne Cheer Academy and Pure Allstars at the World Championships in 2015 and 2016.

Because of my relationships within the Cheerleading world I was approached to provide support to the athletes on team Australia whilst they were in America. This included attending trainings whilst the team was still in Australia to offer advice on injury prevention and looking after their bodies with the increased training load. When we were in America the team had an intense training schedule and competed five times. Four of which spanned over five days. I provided osteopathic treatments and sports taping as well as advice on recovery between trainings and competitions.

What were the highlights for you whilst being away with the team? Any interesting experiences?

The team competed incredibly well at the World Championships. They put three zero deduction routines on the floor and placed 8th at the ICU worlds championships as team Australia and 7th at the IASCF world championships in a very competitive division. It was so exciting to watch the team put the best routine possible on the competition floor

The Cheerleading world championships are held at The Wide World of Sports which is actually inside Disney World in Orlando, Florida. It is quite a unique experience, you stay in a Disney themed resort with thousands of cheerleaders from all over the world. You can’t leave your resort room without walking past a team practising their routine wherever they can find the space. It’s such an exciting atmosphere!

Would you recommend getting involved in working with people outside of the clinic to anyone? If so, why

Absolutely! It was so rewarding to join these athletes on their journey and watch them grow into the team I saw on the competition floor. I loved sharing my knowledge and supporting the athletes through treatment and education. It can be terrifying to be so close to competing and have an injury, pain or tightness that may prevent you from competing at your best. Having an Osteopath on the tour meant the athletes could discuss these concerns with me and have treatment if necessary. I was able to really see the benefit of Osteopathy for these athletes and the difference I was making as they prepared for and competed at the World Championships. 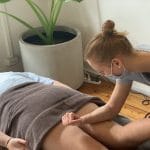 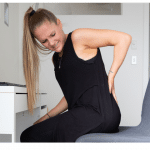