What is the diaphragm? And why does it matter?

This blog is the first in a multi-part series about the diaphragm, which is possibly the most under-rated muscle in your body, but arguably the one with more responsibility and influence on your overall health than any other single muscle .

The diaphragm is the underdog and the unsung hero of the muscle world, not as showy as the biceps, not as troublesome as the hip flexors and not as well known as the hamstrings. It is the main muscle of respiration, is important for your posture & plays a role in the pressure balances (or imbalances) in your body. It has influence over your pelvic floor, a relationship with the muscles in your neck & also has the ability to confuse runners to no end by causing referral pains in the shoulder. That’s right, those strange shoulder pains during your Saturday run are caused by a tricky muscle down below.

So let’s get a little bit of backstory on this incredible musculotendinous tissue.

Please tell us about yourself Diaphragm…

The diaphragm lives in between your thoracic and abdominal cavities. That means it sits between your chest and your belly & it acts as a partition between the two spaces. It’s shaped like a dome which is fixed on all of it’s outer edges which means only the middle part moves – just like the rise and fall of a parachute being held at it’s edges by children playing the parachute game (please see adorable photo below). 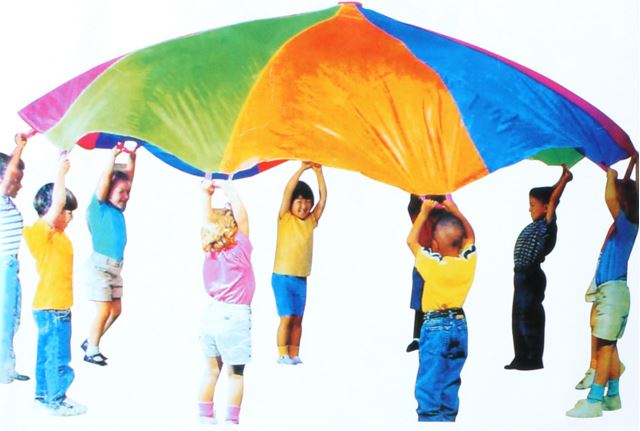 But what is the diaphragm attached to you ask, and what a great question it is!

As a fixed dome, the diaphragm has influence over and is influenced by, your lumbar vertebrae at the back, your lower 6 ribs on either side and the lower part of your chest bone (sternum) at the front.

These however, are just the direct attachments of the diaphragm. When it comes to connective tissue connections, the diaphragm is connected to many more anatomical structures in your body. These include your deepest abdominal core layer, your heart, liver, hip flexor and pelvic floor to name a few. So as you can see, the old diaphragm has a lot of connections in the anatomical community of your body.

What about the diaphragm’s occupation?

The diaphragm is the main workhorse in your body’s respiratory system, but also has a few hobbies on the side, which are incredibly important for your wellbeing, including:

While these hobbies are certainly important, respiration is the diaphragm’s main gig, so let’s get to it!

As you breathe in, the domes of the diaphragm are pulled down and flattened slightly, which pushes your abdominal organs down too. Your ribcage expands through the work of both the diaphragm and some of its helpers (more on that below) and all of this results in a pressure increase in your chest cavity, which causes air to be drawn into the lungs. Quiet natural expiration happens through the relaxation of the diaphragm and elastic recoil of the thoracic musculoskeletal system which, then forces air out.

As mentioned above, the diaphragm is not alone in this respiratory venture. There are helpers in the form of muscles in your neck, chest & back, which, help the diaphragm, do its job by attaching to your ribs and helping with the expansion of your rib cage during respiration. These muscles aren’t really meant to work too hard, but if the diaphragm is compromised then they will start to work overtime and that’s when we see problems arise.

What problems you ask? Well, we’ll talk more about that next time, but it’s important to know that it’s not just disease and serious dysfunction we’re talking about. It’s actually more run of the mill, everyday type issues like posture (desk ergonomics, running style etc.) and stress, which can cause diaphragmatic complaints. These are issues that everyone faces from time to time and it’s important to know what we can do about them & how we can prevent them.

Hopefully that’s enough to wet your appetite – we’ll see you next time for more of the diaphragm diaries!

Sign up to catch the latest from the Beyond Team

Looking to Book an Appointment?

Beyond is here to help you Move through life! Booking an appointment online is the most convenient way to lock in the location, practitioner & time you want.